If you've been following the housing market lately, you might feel a little whiplash with the abrupt shift.

We've gone from a red-hot seller's market to a relative standstill in just a few months.

As a result, buying and selling a house today looks virtually nothing like it did a year ago, when homeowners had multiple offers within days and buyers competed mightily to win a bid on a home.

If you're wondering how we got here and where the market might be heading next, here are 10 stats to help make sense of the drama.

After three interest rate hikes from the Fed, the average rate on a 30-year fixed mortgage reached 6.94% during the week ending October 20, 2022 — the highest since the early 2000s.

Combined with home prices that have risen 43% since the start of the pandemic, the monthly mortgage payment on the median asking-price home now stands at a record $2,552. Per Redfin, that's up 50% from $1,704 a year earlier, when mortgage rates were at 3.01%.

As rates continue to push mortgage payments beyond the limits of affordability, many buyers have to lower their max budgets, compromise on priorities, or wait for home prices to drop.

2. The mortgage payment on a median-priced home now eats up 30.2% of the median household income

A recent Zillow analysis showed that from 2005 to 2021 the average share of household income spent on a mortgage payment was 22.8%. Today, the payment on a typically priced house consumes 30.2% of the median monthly wage, not including taxes, insurance, or other costs associated with owning a home.

The analysis concluded that home values would need to fall about 25% to return to the pre-pandemic rate of affordability. In pandemic hotspots like Austin, Miami, and Nashville, prices would need to drop more than 30%.

However, most economists agree that a significant drop in home prices is unlikely — especially while the job market remains strong and housing supply remains low. Unfortunately for home buyers, affordability is likely to remain an issue for the foreseeable future.

Download the Clever Buyer's Guide and get free weekly tips

3. New mortgage applications are down 38%

After a series of interest rate hikes by the Fed, the number of buyers seeking a new mortgage has declined for 10 straight months.

To lure buyers back to the signing table, some mortgage companies are even offering incentives to help buyers cut their interest rates — either covering the costs out of their own pocket or working with sellers to cover the discount on the buyer's behalf.

Some incentives like 2-year rate buydowns are temporary, but the annual cost savings on a typically priced home can reach into the thousands. Moreover, many lenders and realtors advise that home buyers may be able to refinance at a lower rate once the incentives expire.

Still, for the typical earner, the incentives aren't enough to make up for the lack of affordability in the market. For now, pending home sales are off 32% from a year ago.

4. 85% of current mortgage holders have a below-market interest rate

A recent report from Redfin found that 85% of mortgage-carrying homeowners are locked into an interest of 5% or better.

Rather than give up a good thing, many homeowners who might otherwise consider upsizing are simply staying put. Others are opting to rent out their homes to cash in on rising rents.

The result is that fewer listings are entering the market at a time when the housing supply is already tight.

5. 22% fewer listings entered the market in September compared to a year ago 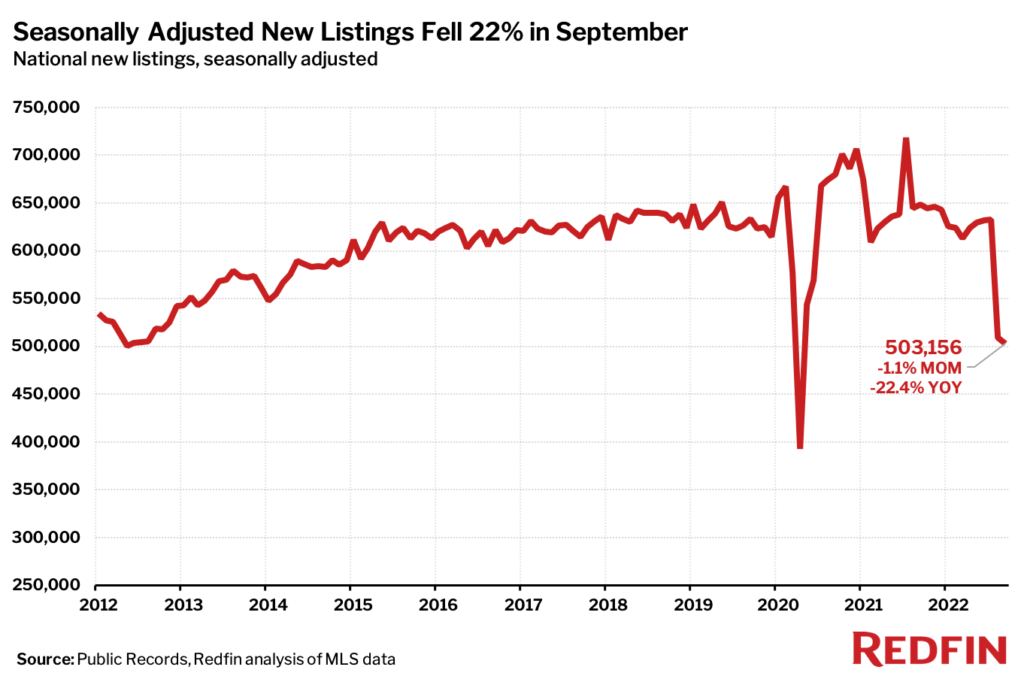 Some home sellers are responding to the market shift with more aggressive price drops, while others are pulling their homes from the market altogether.

Across the entire U.S., only 503,156 new homes entered the market in September — representing the largest decline in new listings since the pandemic hit in the spring of 2020.

"Homeowners are unlikely to trade in their 3 percent mortgage for a new home with a 7 percent loan unless they absolutely have to, so existing home inventory should remain low," notes ATTOM executive Rick Sharga in a statement to Bankrate. "And builders have scaled back on housing starts for the past three months. That means we are not likely to see a huge boost in supply from new construction anytime soon, either.”

6. With both supply and demand dropping, home sale prices remain 6% higher than a year ago

“The plunge in new listings is hindering growth in housing supply, which is keeping home prices relatively high even though the market is slowing down,” Redfin Deputy Chief Economist Taylor Marr says in a statement, noting that inventory tends to rise in a typical downturn.

ATTOM's Rick Sharga puts the supply crunch into perspective like this: “Before the housing crash of 2008, inventory peaked at about a 13-month supply – twice what we would see in a healthy market. Today, we have about a three-month supply, which is about half of what we need."

For home values to fall as dramatically as they did after 2008, the supply of homes would need to far exceed buyer demand. But homeowners and builders are pulling back on new listings, and foreclosure starts are hovering near record lows, so home prices are holding fairly steady.

Still, home prices are slightly off their June peaks, and many economists expect further declines of about 5 to 10% by the end of 2023.

7. With so much uncertainty in the market, September stats show 17% of pending home sales fell through

Buyers and sellers canceled a record 60,000 home purchase agreements in September. Moreover, Redfin reports that fewer than half (46%) of offers written by their agents faced competition — the lowest share since the start of the pandemic.

"The U.S. housing market is at another standstill, but the driving forces are completely different from those that triggered the standstill at the start of the pandemic,” Redfin Economics Research Lead Chen Zhao says in the report. “This time, demand is slumping due to surging mortgage rates, but prices are being propped up by inflation and a drop in the number of people putting their homes up for sale. Many Americans are staying put because they already relocated and scored a rock-bottom mortgage rate during the pandemic, so they have little incentive to move today.”

8. A record 22% of homes listed for sale had a price drop in September

Despite the drop in buyer demand over the past few months, sellers' asking prices are still up 8% over a year ago — signaling a possible disconnect between market realities and sellers' expectations.

"The most recent (several) listing appointments I've had were with prospective sellers that were unwilling to accept that they missed the recent top and that prices were not still going up," says Ken Sisson, a realtor based in Los Angeles.

Mismatched expectations have resulted in many sellers reducing their list price to attract buyers.

More than 1 in 5 home listings underwent a price drop in September, the highest share since home prices last bottomed out in 2012.

"Even though the market, by the numbers, is still a seller's market, the negotiations feel more like a buyer's market," says Sean Gilliam, an associate broker with LoKation Real Estate in Northern Colorado. "Buyers are holding off on making offers on properties that don’t have all of the boxes checked."

Buyers in 2020 and 2021 were willing to waive inspections and even make up the difference if a home didn't appraise for the asking price, but that's no longer the case in many markets. With buyer demand waning, sellers have to do more to make their homes stand out from the crowd.

"It will be very important that the home is updated and shows well compared to the other properties prospective buyers are also viewing," agrees real estate investor Tim Gordon. "If it isn't, the only thing that will attract a serious buyer is a lower price."

In some instances, says Gilliam, "sellers and new construction communities are offering to pay down the buyer's interest rate. They're decreasing the down payment or the earnest money, so if buyers want to pull out, it won't cost them too much."

In today's expensive housing market, buyers will overlook a lot to own a home, including poltergeists.

According to a survey of 1,000 Americans by Real Estate Witch, more than half of home buyers say they'd consider purchasing a haunted house — including 34% who say they'd do it for the cost savings.

Bottom line: Things may get worse before we see the light

“The housing market is going to get worse before it gets better," says Redfin's Zhao. "With inflation still rampant, the Federal Reserve will likely continue hiking interest rates. That means we may not see high mortgage rates — the primary killer of housing demand — decline until early to mid 2023.”

While the near-term outlook may be grim, there are still opportunities. With interest rates rising, it's one of the better times to open a saving account in recent memory. If you're looking ahead toward buying, now may be a good time to focus on paying down credit card debts and transferring any extra money into saving for a down payment.

You'll be in a better position to pounce if interest rates start declining in 2023 and home prices stagnate or even fall as expected.