Graduate. Get a job. Buy a home. Start a family.

For decades, that was the commonly accepted progression of life for young American. But in recent years, a new financial hurdle has forced young people to adapt their life plan: student debt.

The 2000s saw a massive surge in students enrolling in degree-granting, post-secondary institutions, peaking at 18.1 million in 2010. Simultaneously, the price tag of a college degree skyrocketed. Between 1992 and 2012, the average cost of tuition, room, and board increased by 73%.

Rather than deter enrollment, more and more students began taking out loans to pay for their education. By 2012, approximately 71% of all graduates from four-year colleges had student loan debt.

This has had a major impact on both a macro and individual scale. As of July 2019, Americans owe $1.59 trillion in student debt, an average of $37,172 per debtor. According to the Federal Reserve, that’s more than three times the country’s total student loan debt in 2006.

As the same time, household incomes have remained more or less stagnant for bachelor’s degree holders, which, coupled with high interest rates, has made it incredibly difficult for graduates to pay down their debt.

To be able to pay off their college loans, many young adults are making sacrifices in other aspects of their life. The most common is delaying homeownership.

In a recent survey, we found that 48% of undergraduates with student debt plan to put off buying a house because of their student loans.

And it’s not just homeownership that’s being delayed: four in five student debtors are putting off a major milestone because of their student loans. The debt incurred during their college years is having a real economic impact that needs to be measured.

The following is an analysis of data from a survey of 1,000 current undergraduate students about how student debt is impacting their financial decisions, as well as a survey of 1,000 Americans about their spending habits and personal finance goals.

We’ll explain the impact student debt will have on the housing market, how students are supporting themselves through college, students’ limited understanding of student debt, as well as the generational differences between millennials and Baby Boomers.

Student Debt is Becoming a Problem for Would-Be Homeowners

84% of millennials still believe homeownership is part of the “American Dream.” Unfortunately, it’s a dream many are being forced to put off until later in life.

According to a recent Federal Reserve study, a $1,000 increase in student loan debt lowers the homeownership rate by about 1.5%, equivalent to an average delay of about 2.5 months in attaining homeownership. For the average college debt holder with $37,000 in debt, that ends up being about a 7.7 year delay in their path homeownership. 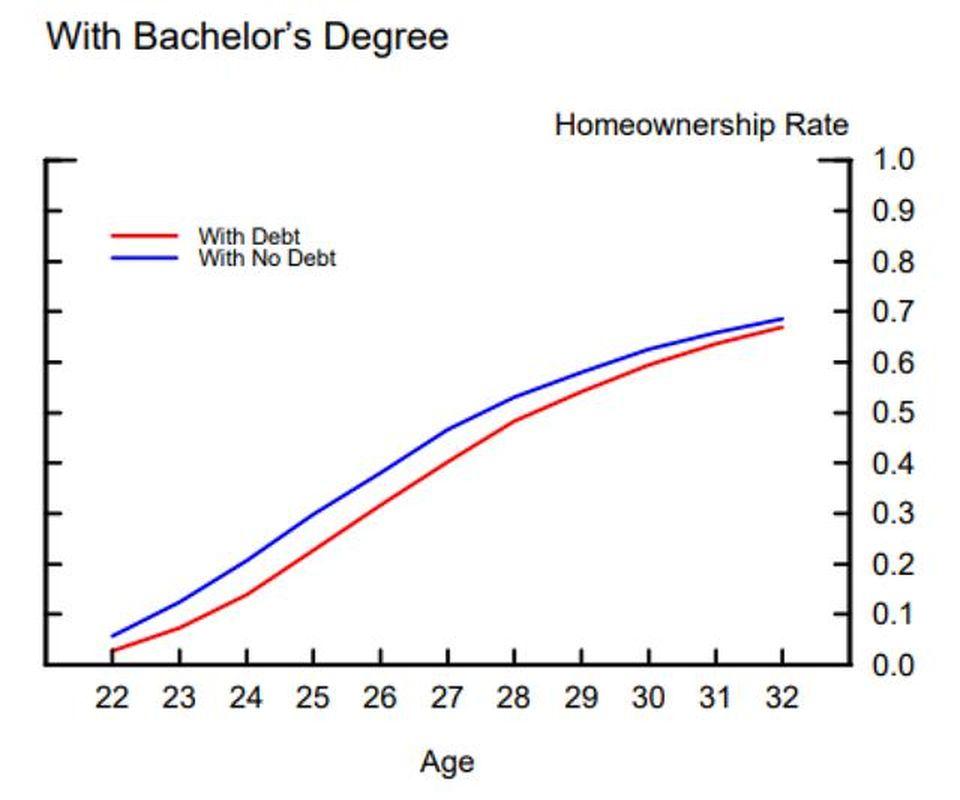 This graph is adapted from Mezza, A. A., Ringo, D. R., Sherlund, S. M., & Sommer, K. (2015). On the effect of student loans on access to homeownership. Divisions of Research & Statistics and Monetary Affairs, Federal Reserve Board.

Data on student homeownership expectations correlates strongly with this insight: We found that college graduates with student debt plan on pushing back homeownership by about seven years .

We learned that buying a home is a top priority for most young adults: 54% of college students with debt would start saving for a down payment if their student loans were forgiven or cancelled.

Despite the desire to buy a home, younger generations are increasingly putting off homeownership due to a tight labor market and mounting debt.

According to Benjamin Keys, a Professor of Real Estate at the Wharton School of the University of Pennsylvania:

“[Millennials] are certainly starting off at a disadvantage relative to previous generations, and a lot of the scrutiny of millennials is really misplaced given the disadvantages they’ve had in terms of their costs of education and poor labor market upon entry.”

Homeownership isn’t the only major purchase college debtors are delaying. Students with debt are also putting off saving for retirement (41%), traveling abroad (37%), and having children (34%).

It’s also concerning that 51% of college students are putting off emergency funds, which are absolutely necessary if they ever plan on buying a home. For those looking for hard and fast numbers, we found in a previous Clever study that the average homeowner spends approximately $2,676 on maintenance and repairs each year. Those costs will be even higher for a fixer-upper.

Ongoing maintenance and repairs are stark realities of homeownership, but according to a Federal Reserve report, 44% of Americans could not cover an unexpected $400 emergency that led to an out-of-pocket expense.

Student debt isn't just an issue for recent graduates (although it's certainly a compounded problem for graduates in the last decade). There are 44.7 million adults with active student loans in the U.S. The most recent figures from the U.S. Census Bureau estimate there are over 171 million adults in America between the ages of 20 and 59, which means an estimated that 26% of adults under the age of 60 have student debt.

A core problem with student debt is that students acquire this type of debt early on in their lives and, unfortunately, most students don’t understand it very well.

56% of college students don’t know the interest rates on their student loans, which makes it hard for them to plan their financial lives. For example, once a student graduates they should focus on paying down high-interest debt, while managing low-interest debt over the long term.

This same study also shows a strong correlation between student loan debt and renting, rather than owning a home. Homeownership rates were 36% higher among graduates who had paid off their student debt or never had student debt. When college graduates pay off their loans quickly, or have little to no debt to begin with, they're much more likely to become homeowners. In fact, graduates that paid off their debt were 7x as little to own their home outright.

Let’s take a closer look at how students are supporting themselves through college.

Once upon a time, college-goers were able to pull themselves up by their bootstraps, work a part-time job or co-op during school, and leave college debt-free.

Most of today’s college students take this approach: 81% of undergraduates with student debt are supporting themselves with either a part-time or full-time job. Unfortunately, the other ways students support themselves can be damaging to their financial and personal well-being.

Student loan debtors are 8x more likely to take out an additional personal loan to finance their expenses during college, and 71% more likely to carry a credit card balance. High-interest debt can create a perpetual cycle of debt that’s nearly impossible to escape.

All of this added debt leads to students pushing back retirement. According to a Bankrate study, most Americans agree that 61 is the ideal age to retire, but the median college graduate believes they’ll be able to retire by 65.

This is having a serious drain on students, as only 37% of undergraduates “strongly agree” that their college education is worth the cost.

Of course, college is worth the cost in the long run. In 2002, a bachelor’s degree holder could expect to make 75% more than someone with just a high school diploma. Nearly a decade later that premium had risen to 84%, according to a Georgetown University 2011 study.

A bachelor’s degree is, theoretically, worth about $2.8 million over a lifetime, but it’s difficult for many students to see the light at the end of the increasingly-long debt tunnel.